Informative note about private use of boats which are intended for nautical or charter use by the owners and others. DGMM answers 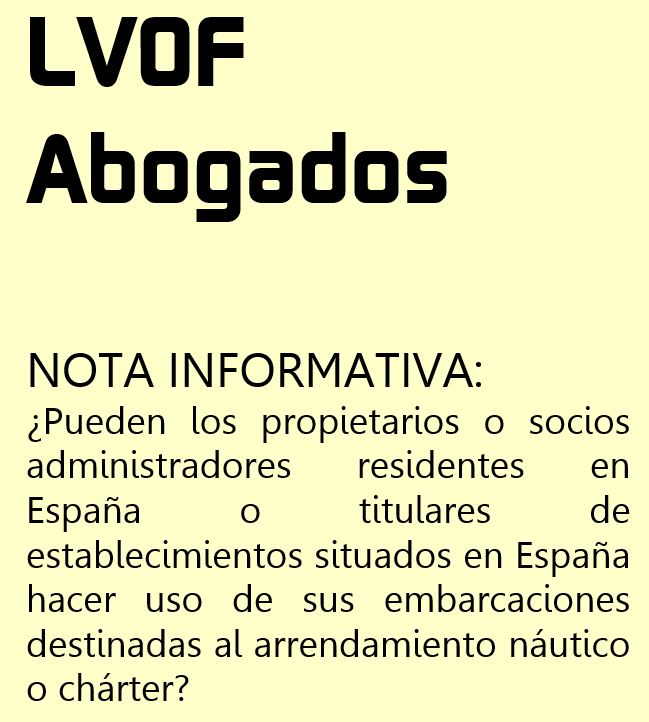 Earlier this October, the Dirección General de la Marina Mercante published the response to a question raised on the Special Tax of Certain Means of Transport, better known as the Matriculation Tax.

The question raised related to the possibility that the owners or management agents residing in Spain or owners with established businesses located in Spain, can use privately their own boats which are intended for nautical or charter use.

The answer to the question raised is as follows: private use, sporadic in nature, ships or vessels engaged in leasing or chartering in Spanish territorial waters, by their owners or management agents residing in Spain or established businesses located in Spain, is possible from the beginning of the activity, if IEDMT (matriculation tax) has been paid, either from the four years of the first definitive registration in Spain or, if the vessel or vessel are flagged in another flag country, from the beginning of the activity in Spanish territorial waters. All this naturally must comply with the regulations published in IS 3/2020 and the tax obligations corresponding to the activity.

The owners or management agents residing in Spain or who have established businesses located in Spain become, sporadically, the users of the vessel or charter vessel, under the same conditions and with the same qualification requirements required for the exercise of the lease or nautical charter.

The publication of this response now, does not really announce anything new to what is already known and being carried out for a long time. The importance of the note is that no one can prevent the owner from making use of his boat if it has complied with what Law 38/1992 on Special Taxes required in respect of the Matriculation Tax on charter vessels.

However, we must not forget that a charter vessel registered on the sixth list or a ship registered in another country but affected by chartering in Spain, is a commercial ship for all purposes and, therefore, the use of the vessel must be commercial, that is, the owner of a charter boat that having paid the Matriculation Tax or having 4 years since registration in the case of Spanish-flag boats and from the beginning of the activity in the case of foreigners, wants to use it must do so as if it were a customer, that means that he must have a charter contract on board and must pay for the use of his own boat declaring and entering the corresponding VAT in the Spanish Treasury, and this is what the response of the Directorate-General of the Merchant Navy refers to when it states that it complies with tax obligations.

Therefore, this response is important because if from a tax point of view it was already known that by complying with the Matriculation Tax law the owner could make use of his boat, it is now the Maritime Administration that confirms it.